Many people (including you right now) often are surprised or shocked when they find out that Legally Blonde is one of my favorite movies. Now, I agree, it probably is not the most manly of all the movie options out there. But I certainly have my reasons as to why I love this movie so much. 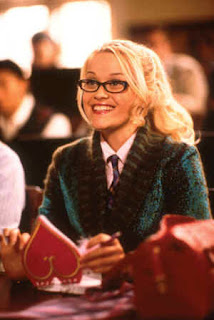 1.) It shows that you do not have to live up to stereotypes- When the movie starts, you are led to think that Elle Woods (played by Reese Whiterspoon),  is your prototypical California, rich girl blonde with a banging body, but nothing to speak of in her head. She dispells this notion very early on when she goes dress shopping with her friends for her big date with her boyfriend Warner (played by Matthew Davis). Thinking that Elle is just a stupid blonde with daddy's credit card, the salesperson attempts to overcharge her on a old dress by telling her it's brand new. Elle, using her fashion knowledge, then asks the salesperson a series of questions about the dress that she should know automatically. When Elle catches the salesperson in the lie she essentially tells her that she saw the dress a year ago and the she "picked the wrong girl", if she was attempting to sell it to her at full price. So very early on we see that Ms. Elle Woods is not your stereotypical "dumb blonde." 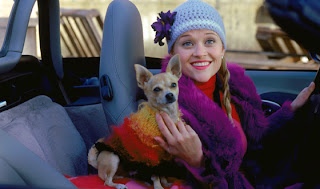 2.) Having a Heart- While it is clear that Elle is very bubbly and  a social butterfly, it also very apparent that she has a heart, and a good one at that. She treats those around her with kindness and compassion. When she sees her classmate, David Kidney (played by Oz Perkins), being harshly rejected and ridiculed by a girl he's trying to ask out and her friend, Elle cannot simply walk away. She goes up to him, slaps him in the face, and asks why he never called her after giving her the "greatest pleasure" she's ever known. When David, totally confused at this point, apologizes Elle tells him that it is too late as she has spent too many hours crying over him. Elle leaves with a giggle, while the girl who was rejecting David at first is now asking him when he wanted to go out. 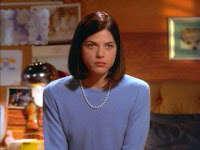 3.) Give everyone a chance- When Elle first meets Vivian Kinsington (played by Selma Blair) in class, it isn't a pleasant experience as Vivian basically gets Elle kicked out of her first Harvard class for not reading before class. Their second counter is even worse as it is revealed that Vivian is the woman who stole her ex-boyfriend Warner from her.    Despite these facts, Elle tries to be semi-friendly to her. But a person can only take so much. Not being one to just take verbal barbs sitting down, Elle returns a number of Vivian's insults and condescending remarks right back at her. When Elle is supposedly invited to a costume party by Vivian, she quickly finds out upon arrival that Vivian blatantly lied to her. When the two come face to face this humorous exchange happens:

Vivian: Nice outfit. (Laughs)
Elle (dressed as a Playboy Bunny): Oh, I like your outfit too. Except when I dress up as a frigid b@#$%? I try not to look so constipated.

Later on, Elle and Vivian are both brought on as interns with Professor Callahan's (played by Victor Garber)
law firm to assist with a court case. Now on the same team, Elle, again tries to be friendly towards Vivian. This time, Vivian is a bit more receptive. Things really start to change when Warner (also brought onto the firm as an intern) tells Elle to give up the alibi of the woman (Brooke Whyndam) who Mr. Callahan was trying to protect. Elle responds by telling him that she gave Brooke her word that would not give up the alibi. Warner tells her to basically forget about her word and think about herself. Vivian is visibily disgusted by this.

Elle and Vivian finally become friends when Vivan visits Elle in her room to pick up the deposition for the court case. They end up connecting over the story that Warner was wait-listed by Harvard before his dad made a call. Elle even lets Vivian play with her chihuahua Bruiser Woods. Despite all that had occured between them, Elle kept the door open to Vivian, and they eventually connected. This is acknowledged in Elle's graduation speech when she says (looking at Vivian), "First impressions are not always correct."

4.) Determination is the name of the game- Elle Woods does not give up easily. If there is something she wants she is more than ambitious enough to go after it. My favorite example of this is when she is attempting to get into Harvard Law School to chase after Warner following their dramatic break-up. When she presents this idea to her academic adviser and even her parents, they both try to push her away from choosing that path. The reasons they give range from her not being "boring", to having a 4.0 as a Fashion Merchandising major. Despite the odds that stand in her way, Elle works her butt off to provide the best package she can to Harvard. In addition to doing a heavy amount of studying for her LSAT's she goes through the trouble of making an admissions video for the committee at Harvard to see. Being impressed with her extra-curricular activities, a 179 or LSAT's, and her impecable 4.0 GPA from CULA, she is admitted into Harvard. Who knows what happens to our favorite blonde if she never attempts to even apply to Harvard?

If you haven't seen Legally Blonde, please do so. For these reasons, and many more, this is one of my all time favorite movies.