Ladies of the Hardwood Moving Up- 2013 WNBA Draft prospects

This year's WNBA Draft may be the most star studded draft in WNBA history. As a matter of fact, with the names that will be involved, ESPN should put this on PRIME TIME, and give it all of the fanfare that the NBA and NFL drafts get. And they will! For the first time in WNBA history, the draft will be televised in prime time! So, in honor of what should be a awesome event, I want to discuss a few prospects who should be taken off of the boards pretty early. 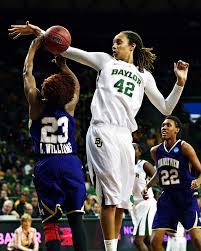 Unless you've been living under some rock in the middle of  nowhere, you should know all about this young woman. She has lived up to her hype 100% since the day she came to Waco, Texas. You want statistical proof? Here it is. This is her stat line for her four years at Baylor- PPG 22.2, RPG 8.8, BPG 5, FG% 57. Can you say dominate post force? There may be no player in the history of women's college hoops who impacted how each game was played more than her .Griner and future Hall of Fame Guard-Forward Diana Taurasi  should be a dynamic duo down in Phoenix once the Mercury take her #1 overall. 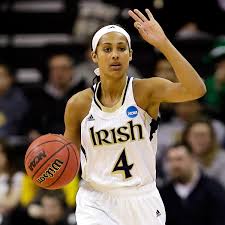 Sky-Sky, one of the most accomplished and decorated players in WNBA history is now preparing to take her leadership and dynamic game to the next level. As a member of the Fighting Irish, Diggins put up averages of 15.3 points, 4.6 assists. While the numbers look great, so much of what Diggins does cannot be documented on a stat sheet. She is the undisputed leader and heart of that Notre Dame team. In each her three yrs. Notre Dame has made the Final Four of the NCAA Tournament. But whether it was Danielle Adams and her Texas A&M Aggies, or Ms. Griner and her Lady Bears, the Irish were not able to overcome the opposition to win the title. In this, her final year, Diggins will give it her all for a National Title.

The Riverdale Baptist product improved each year she played as a member of the Lady Terps. Last year, she would make the scouts and pundits take notice of her as she finished the year leading the entire country in field goal percentage (62.3%). She finished off her collegiate run this season by averagin
g 18 points (career high), grabbing 9.7 rpg (career high), shooting 54% from the field, and 79% from the charity stripe. This stat line earned her a spot on the All-ACC First Team. Many Washington Mystics fans, including the one writing this article, hope that she sticks around long enough for the Mystics to take her with the 4th pick in the draft. 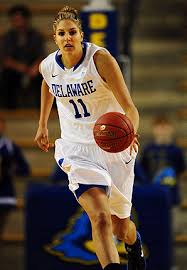 Talk about an impact player. Dell-Donne, with the help of her fellow Lady Blue Hens turned the University of Delaware from no name mid-major, to National Title contender. Dell-Donne is Delaware's all time leader in points (2,258), points per game (26.9), free-throws made and percentage (586 and 90.7% respectively), three pointers made and percentage (154 and 39% respectively), scoring average for a season (26.7 ppg), and points in a game (54 vs James Madison). The now two time AP All-American first teamer should not expect to be waiting in the green room for her selection very long on April 15th.


I don't know about you, but I cannot wait until April 15th. Even better than the draft should be the debut and careers of these young ladies. Be sure to tune in to ESPN 2 at 8 PM for the first round, and ESPN U at 9 PM for rounds two and three.